When I saw this trigger photo at the Moxie Fab World, I pretty much had an idea of what I wanted to make.

The problem was, I didn’t have any utensil stamps, stickers or anything else.

And in these cases, once I have a clear idea, it is hard to come up with something else without trying out the first one.

So I decided to get some utensil charms. I didn’t find any, but I found a pack of plastic ones which were covered in silver glitter for just 79 cents. Since I wanted a “silvery” look, I scraped off some of the glitter, and covered them with pearl paint.

Here is my card: 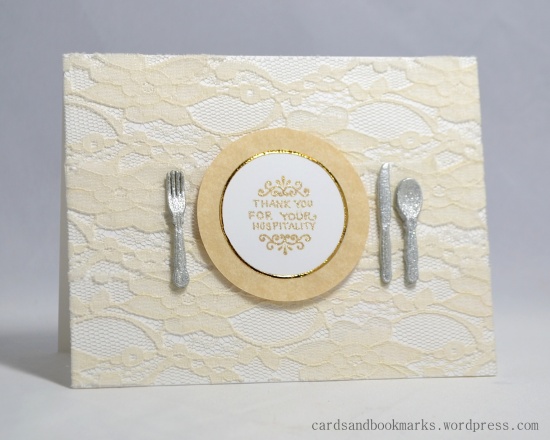 A very literal, interpretation, but what can I say, the idea just stuck to my mind!

I had fun making the plate/sentiment label.  I did not layer circles, but rather cut out rings and put them together like a mosaic. I must say, that thin gold strip took a couple of tries! However, I was happy that in the end they all fit together snugly.

Not having any small stamp saying “Thank you for your hospitality” I decided to write it out. I did however  use a small part of a border stamp for the flourish. I stamped with antique linen distress ink and wrote with antique linen distress marker (plus point for having both ink pad and marker in the same color!) I then traced the whole thing with star dust gel pen. 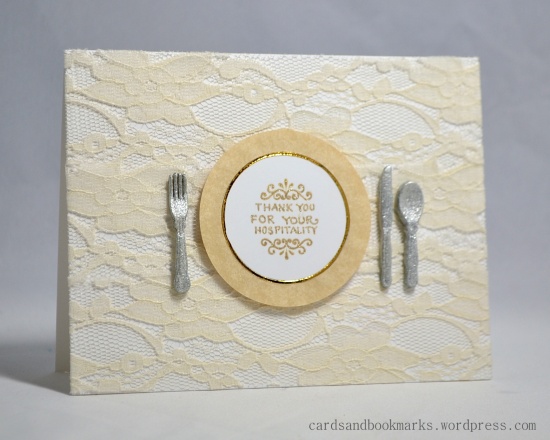 After much deliberation on size/color/texture of the background I settled on this one, which I made by wrapping lace around white card stock. I don’t think I ever used this lace in any card before (except in the last Tuesday Trigger) and I rather like this look against the white card base!

The only complaint I have is that I wish the utensils were a bit bigger (in my head they were!) so I could have made the plate a bit larger (I wanted them to be proportional) and that way, less of the background would show, with the focus mainly on the plate/utensils.

Anyways, enough rambling. Thanks for visiting, and I would love to hear your opinion!